Welcome! This website will share the travel experiences of Nate, Sarah and Brady as we drive along the Pan-American Highway- from Maine to Ushuaia, Argentina. In the summer of 2012, we will leave our jobs, pack our truck and head out on the adventure of a lifetime. We hope you enjoy following along!
Home   /   The Guanajuato Labyrinth

The drive from Sayulita said it would take about eight hours…no problem.  Leaving at 9am would leave us plenty of time to get to camp, and make a bite to eat before catching the sunset over the city…perfect!

Well as anyone who has done any amount of overlanding would know, things can change, and boy did they change!  Mexico has a tendency to slow you down, not only because of the mountain sized topes, but the toyota pick up with three horses in the back swerving up the mountain passes can change things as well.  Also don’t forget about the herd of cows in the middle of the road…or wait what about the million and one toll booths?

Ok, so I guess we were a little ambitious with our 375km drive to Guanajuato that day.  The trip ended up taking us about 11 hours in total after getting a little turned around in Guadalajara.

Guanajuato is a very old city nestled in the valleys of the central mountains of Mexico.  The city was originally founded due to its richness in gold and silver.  Colorful houses perch on top of the surrounding mountains leading downhill into the city center which has a stark european feel to it.  From the city center headed farther down hill you will find an amazing network of underground tunnels.  These tunnels were formerly rivers until they flooded the city in the early nineteen hundreds.  Now the tunnels are used for directional travel from one end of the city to the other.

The sun set just outside of Guadalajara and with over two hours left to go we hit the gas.  We pulled into town in pitch black expecting our trusty GPS to guide the way.  We were in for a surprise!  First of all, tiny cobblestone streets, although beautiful, hate our truck.  It was kind of like playing pinball in the dark and you are an oversized black ball. Bouncing from curb to curb we worked our way to the city until the GPS zoomed out.  Why it zooms out at the most inconvenient times can only be chalked up to Murphy’s Law.  Well, we missed our turn and plummeted into the elaborate network of tunnels, where we then lost all correspondence from our trusty overhead satellites.

After what seemed like an eternity, we emerged from the underground eeriness, with the adrenaline pumping.  We managed to wiggle our way to the opposite end of town with just one wrong turn!  Finally we regained our GPS and it led us to the Panoramica road which meandered around the city for a fresh start.  After about 45 minutes of cobblestone pinball, and a couple multipoint turns we found our camp.  It was a tiny RV park perched up above the city with an incredible view of homes all lit up on the hillside.

A couple of our friends were already there volunteering with the Muskoka foundation, so we parked the truck and made some dinner.  After an 11 hour driving day the both of us were completely wiped.  We headed to bed with the soothing sounds of the infamous dog orchestra of Guanajuato.  In fact, there are so many dogs barking in the distance that if you sit in silence you almost think you are the only human in existence.  It’s pretty incredible.

We were awoken by a bunch of hoodlums surrounding our truck yelling “Holy shit! It’s the Long Way South!”  It was our friends Overland the World and The Dangerz.  We hopped out for some formal introductions as until now we had only been online acquaintances with the same dream.  Everyone got to meet our spaz…I mean dog, and we all shared some quick stories before heading back to bed.

The next morning everyone gathered and we got to hear about their incredible time volunteering at the orphanage.  We also got the scoop on the Maya Rally.  Up until this point I had only heard about it, and never looked much into it.  They informed us that several other teams would be showing up over the course of a couple days for the “End of the World” rally.

Later on Sarah and I split from the pack to go check out the town and to accomplish our to-do list…water, food and money.  The three staples.   We walked all around town checking out the central square, the markets and the local eats.  Brady is not a big city guy but he handled it well!  That evening another team pulled in, Matt and Isabel from Virginia in their souped up WRX.

The entire group got together for some dinner and a drink at the rotisserie chicken eatery.  Back up the hill we found three more teams there, all from Alaska who made their way down for the rally.  Over the next day, many more teams rolled in and you could feel the competition in the air.  The Rally organizer and CTO of Expedition Portal, Christian Pelletier, showed up to greet all of the teams and invite everyone to dinner for the following evening.  He graciously extended his invitation to us and said “it would not be ok if you didn’t come”. How could we turn down a free meal with great company??

The next morning was a little more of the same; make breakfast, meet some people, Brady pees on someone, take a shower…. Wait a minute.  Yes that’s right, while in Guanajuato, Brady decided he was going to skip the morning tire pee, and just go right for the legs of Bryan and Matt.  I’m glad they were good sports about it, otherwise Brady could have picked a battle he couldn’t win.

Later on that evening everyone gathered for the walk to dinner.  The spot Christian rented out was incredible.  Great food, great drinks and a great view.  The group that volunteered with the Muskoka Foundation gave a wonderful presentation and some of the girls from another Guanajuato orphanage were present to share their photos.  Shortly after the presentation, the Maya Rally introduction began.  The teams were announced and everyone proceeded to the front to collect their information package and to introduce themselves.  After all of the entries, Christian began his wrap up speech while sneakily pulling an additional package out of his bag and placing it in front of our faces saying “We just might have one other team joining us!”  After glancing at each other in an uncertain way, we jumped up and gave an on the spot introduction of ourselves. What the hell, we were going to the same places anyway! 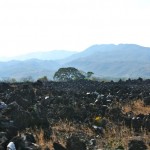