Welcome! This website will share the travel experiences of Nate, Sarah and Brady as we drive along the Pan-American Highway- from Maine to Ushuaia, Argentina. In the summer of 2012, we will leave our jobs, pack our truck and head out on the adventure of a lifetime. We hope you enjoy following along!
Home   /   Our First Weekend Back

Our First Weekend Back

It was an odd feeling pulling back into our hometown.  For the first time in our lives, it felt a little foreign to us.  This was the longest we had ever been away and driving back into town late that night, it felt like everything had changed.  There were new houses and buildings in places that we once roamed around.  Some close friends had gotten engaged while we were away and many people had new jobs, houses and cars.  Things at our parents houses had moved around and changed.  Everything we once knew and were accustomed to was a little bit different.  We understand that nine months is a long time to be away, and that the world wouldn’t be put on hold for us while we were gone, but it was just a very weird feeling to come back and see so many changes. We were having so much fun on the trip that it didn’t feel like almost a year had gone by.

We decided to give ourselves a few days before we started working to adjust to our new lifestyle and to give us time to visit with family and friends. The day after we flew into town, we woke up to an empty house.  We are staying with my parents for the summer and they headed off to work bright and early that day.  We had a significant urge to take our old friend “Sadie” (my 1984 Mercedes 300 D) out for a ride and explore our old stomping grounds.  Sadie spent the past nine months in my parent’s neighbor’s garage to keep her out of Maine’s tough winter.  We think she is a little confused, wondering where her best friend “Truck” is.  😉 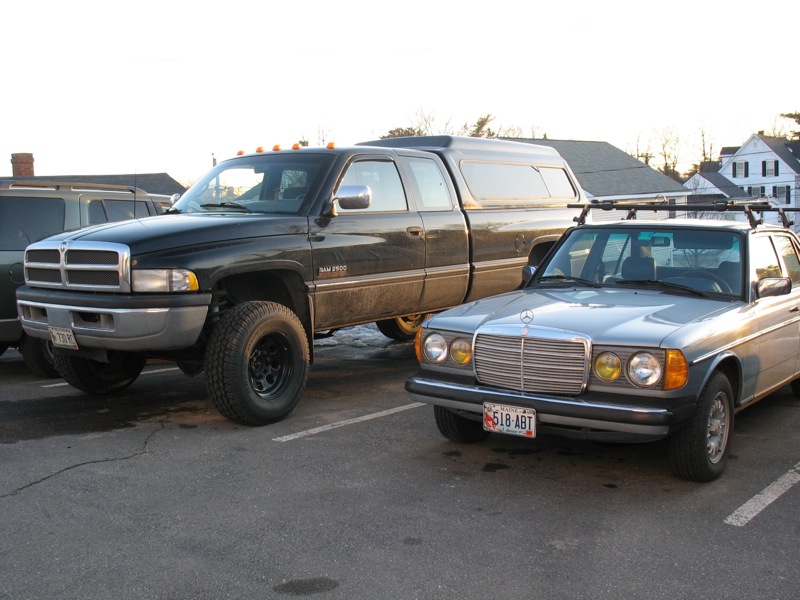 After checking all the fluids, and realizing that the car had no coolant or power steering fluid, we headed over to the auto parts store to restock.  We then decided to drive around all of the neighboring towns and just look.  We didn’ t say much to each other on the ride, just an observation or two or question about road laws here and there.  Although Nate had driven over 17,000 miles in the past nine months throughout eight different countries, it was almost like he forgot how to drive.  There are “no right on red” laws, “stop for pedestrians” laws, speed limits, and seatbelt laws that we had to get used to again.  It was actually very humorous to watch Nate drive around town for the first time, we don’t have as much freedom here as we did down South.

For some reason, we decided our first stop would be to go to Cabelas.  We walked in the front doors and were immediately overwhelmed by the amount of merchandise and numerous options.  As we walked up and down the aisles, shielding our eyes from the bright lights with our mouths hanging wide open, we decided it was too much and booked it out the door.  We made it about ten minutes, that’s a record!  After our overstimulation, we chose to visit the local pizza joint next door and grab our first “good” beer since being back.  Ohh Shipyard IPA, how we have missed you!!

My parents have a dog named Roxi that will be Brady’s playmate for the summer.  Roxi is only one year old and boy is she giving Brady a run for his money! She is ready to play all day, every day.  They seem to be getting along great so far!

That weekend was our good friend Sean’s birthday and we were ready to celebrate being back with our crew.  Everyone was meeting up at our friend Matt’s camp on Kennebunk Pond for some boating and grilling.  Nate and I had stopped by the mom and pop store on the way and grabbed some burgers and hot dogs along with a six pack of Geary’s Pale Ale. It was truly great to see all of our friends again.  It was also really great to hear how many of them actually followed us on our website too!  We ended the night with a few rounds of beirut, a delicious birthday cake and a butchered birthday song for Sean.

The last day of our weekend before going back to work, we went to Nate’s parents house and grabbed our mountain bikes.  There is a beautiful trail that spans 65 miles throughout Southern Maine and Nate loves to take his bike out there.  We hopped on the trail and headed North.  At the halfway point, we stopped and grabbed a couple of sandwiches before turning around and heading home.  We ended up biking about 25 miles through the beautiful streets and trails of our home state.

When we left Central America, we knew that it would be a good break for us to come home and “reset” our minds.  We were living in a beautiful paradise that we, towards the end, were almost taking for granted.  Things that would normally “ooo” and “aaahh” us were just everyday things.  I think the same goes for leaving our home territory.  Since we have lived in Maine our whole lives, we were taking the beauty and simplicity of it for granted.  Riding our bikes and taking slow drives throughout each surrounding town that weekend gave us the ability to see things that we would have normally looked right past.  Our first weekend home spent with family and friends and revisiting all of the areas we know best was a success and we are happy to be home… so far. 😉