Welcome! This website will share the travel experiences of Nate, Sarah and Brady as we drive along the Pan-American Highway- from Maine to Ushuaia, Argentina. In the summer of 2012, we will leave our jobs, pack our truck and head out on the adventure of a lifetime. We hope you enjoy following along!
Home   /   Colombia’s Gem

We woke up to a beautiful morning in the town of Villa de Leyva, Colombia.  We had just spent about a week driving to get as far away from Cartagena as possible and needed to relax. We put the coffee on, set up our chairs and discussed what we would do for the day. It seemed as though we had marathon-drove our way to that point and were ready to relax.  “Let’s go for a hike!” I exclaimed, eager to enjoy Colombia’s heart-stopping mountain views.

We packed a light bag and set off on the trail behind the hostel we were camped at.  No more than five minutes went by when Nate stopped, turned around with his hands on his hips, and asked me in between breaths, “Is… it… just me….. or is…. it… really hard… to breathe…?”  We were at about 8,000 feet.  Much higher than we have hiked in a very long time.  My response? Heck yes, it was hard to breathe!

As the trail emerged from the trees, we turned around and were rewarded with a stunning view of Villa de Leyva and the Boyaca region of Colombia.

We spent about a week in the beautiful, tranquilo town full of pristine white buildings, a ginormous town square and some of the nicest people we have met thus far on the trip.  It was very easy to get tripped up (literally) walking on the uneven cobblestone streets, peeking into each doorway to see what lay behind it and admiring the way the locals greeted each and every person they walked past with a giant smile and a salutation.

We noticed that there was an ostrich farm not too far away from our camp spot, so decided to rent bikes one day and make the trek over to see these mysteriously large birds. We both had never seen ostriches in real life before so we thought, what the heck!  While I ran away from the gigantic birds, squinting my eyes so I didn’t see them following my every step, Nate got pecked away at by several different birds.  Unsure of what to do, he stood there, watching the untrustworthy bird as it cocked it’s head to the side, looking curiously for the next best spot to peck.

Knowing that we had tall mountains and a freezing cold climate waiting for us in El Cocuy, we tore ourselves away from our peaceful, easy life in Villa de Leyva.  But not before going out to pizza with Heather and Scott, who we camped next to the past week.    These two have really figured it out.  They have worked their little butts off and have saved enough money to never have to work again!  Ever!  We had a great time getting to know them, asking them too many questions and enjoying a glass… orrr two or three… of wine with them.

The next morning, we hopped in the truck at 7am, knowing we had at least an eight hour drive ahead of us.  We zipped our way down the highway, paying more in tolls than we have since Mexico!  Meet a ‘peaje’, the death of our bank account.

At one point, our ‘not-so-trusty-lately’ GPS decided it wanted us to take a shortcut. The pavement slowly dissipated, leaving us with a pot-holey, dirt road that zigzagged its way straight up the side of a mountain.  We contemplated continuing on this mysterious road, but time being of the essence, we decided to hightail it back to the main highway.  An hour lost, we were getting a little nervous we wouldn’t make it to the park that night.  We spent the last two hours of our trip seesawing back and forth on the crazy mountain roads getting stuck behind big rigs doing 7mph.  We pulled into the town of El Cocuy around 5pm, with an hour and a half left to make it to our camp spot that night.  Exhausted, hungry, and not willing to drive into the park at night, we decided to get a hotel room.  On our search, we couldn’t help but notice that everything was painted teal and white.  Every building, house, part of the church, sidewalk… everything.  We found a hotel blended into the peculiar scene and paid for a room.  For the first time on the trip, we parked the truck in the road overnight.  We triple checked that it was a safe area, being beside the police station helped ease our anxiety, and flopped down into bed.

The next morning, we were ready to head into the park.  As we walked out the door of the hotel, we were surprised to find about six or seven schoolchildren standing on their tippy-toes, peering into the windows of the truck.  One little boy was even standing in front of the truck measuring the top of his head to the height of the bumper.  When he turned around to see how tall he was compared to the truck his mouth dropped in awe.  At one point, a few of the boys disappeared, only to return with their teacher so she could check out the crazy monster truck outside.  With approximately sixteen eyeballs on us, we packed the truck up and headed out to get our permit to enter the park.

Permit in hand, we couldn’t ignore the rumbling of our bellies.  We found a little corner store selling tinto (very sweet, black coffee) and empanadas.  I don’t know if it was my hunger talking or not, but those were the best empanadas I have had to date.   Filled with chicken, pork, beef, egg and a spicy rice then deep fried, they definitely hit the spot.  After inhaling our empanadas, we picked up our empty basket and made our way to the counter.  Feeling like Oliver Twist, we extended our arms with our empty baskets in the palms of our hands.  We looked at the woman and said, “Dos mas por favor!”

Knowing that we would be in the park for three or four days with no facilities, we stocked up on food, water, fuel, the works.  We spent our first night getting rained on and shivering our way through making dinner.  We pulled out the awning but it was no match against the side swiping wind.  We ate beans and hot dogs in the front of the truck, played a game of Skip-Bo and called it a night.  We ended up sleeping inside of our 20 degree sleeping bags, under the down comforter as well.  It got down to the high 20s at night- the coldest we have seen on the whole trip!  The next morning we hiked our way to a series of lakes deep in the mountain village.   We took a break at the final lake and ate a snack while staring up at our very first glacier we have ever seen.  We sat in silence for about twenty minutes, soaking in the breathtaking views.

The next morning, we hit the road on our way to Ritacuba Blanco where Patagonia or Bust told us there was a beautiful hike.  On our way, we spotted two people with heavy packs, thumbs jetted out hoping for a ride.  They were going to the same place we were, so we all crammed into the front of Truck, packs and all, and bumped along to the other side of the national park.

The two hitchhikers were from Spain, completing a three week trip throughout Colombia.  They were serious climbers and invited us to tag along with them while they hiked to their camp on the mountain that night.  We decided to make a day trip of it and made it to 15,000 feet!!  The highest either of us has ever been!

The trail started off as a tight, muddy path that wove itself alongside the surrounding mountains.  Soon it crossed over a small, raging river and ascended up a scree covered slope.  With slow, careful steps, we followed each other in single file while chatting about previous climbs, trips we have been on and trips we would like to endeavor.

The conversation only lacked when we would be scrambling our way up a steep section of rock or once we made it to about 14,000 feet.  The lung collapsing altitude was taking it’s toll but we pushed on, hoping to make it to our goal of 15,000 feet.  And that we did.

After taking a few pictures, we said our goodbyes to the Spaniards and hit the trail going back down to the truck.  The weather was getting pretty nasty and it was becoming difficult to see more than 20 feet ahead.  Every now and then, we stop and squint our eyes, trying to figure out where the trail was.  About 3/4 of the way down, it started to rain and then quickly turned into sleet.  We threw on our raincoats and picked up the pace.  Once reunited with the truck, we changed our clothes and relaxed in the front, trying to warm up while waiting for the rain to stop.  Nate tried his hardest to find a comfortable way to take a nap with no luck. 😉

Since the place we were camping was closed during the week, we were able to set up shop to make dinner under a roof of one of the cabanas.  We warmed up with a big pot of soup and watched the clouds roll over the mountain tops.

After freezing our butts off for the last four nights, we made our way out of the gorgeous park and back to Villa de Leyva.  El Cocuy has topped our list as one of the most beautiful parks we have ever been to.  It is right up there with Yellowstone.

Back at Villa de Leyva, we thawed out, restocked on groceries, and had the poor people at the hostel do our wet, muddy laundry.  We visited the famous Saturday market where you can buy everything from fruits and veggies to your very own pig head.  Having to tear ourselves away from Villa de Leyva again was hard but we knew it was time to move on.  We said our goodbyes to our new friends, packed up the truck and hit the road…. South, of course 😉 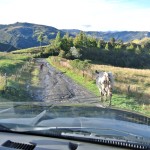 ← The Devil Drives a Corolla
Don’t Go “Braking” My Heart →